Not uncommon is the individual who feels drawn toward occult matters, yet struggles with the actual performance of ritual. I myself did not have the easiest time with this issue when I was younger. Certain measures, however, can help such individuals still find success – i.e. so my own experiences suggest. This post therefore contains some reflections on how I’ve designed Tenebrous Satanism’s ritual magick format to grapple with this issue. Everything alluded-to below is presented in much more detail in my forthcoming book, Nine Keys of Abyssal Darkness.

Contents hide
1 Introduction: Magick for the excessively-grounded?
2 Deeper issues surrounding the suspension-of-disbelief problem
3 How can ritual format help with suspension of disbelief?
3.1 How to make the opening “all-purpose”
3.2 Why openings matter – and why we’ve perhaps forgotten that they do
3.3 Why it’s a good idea to always use the same opening
4 Concluding thoughts 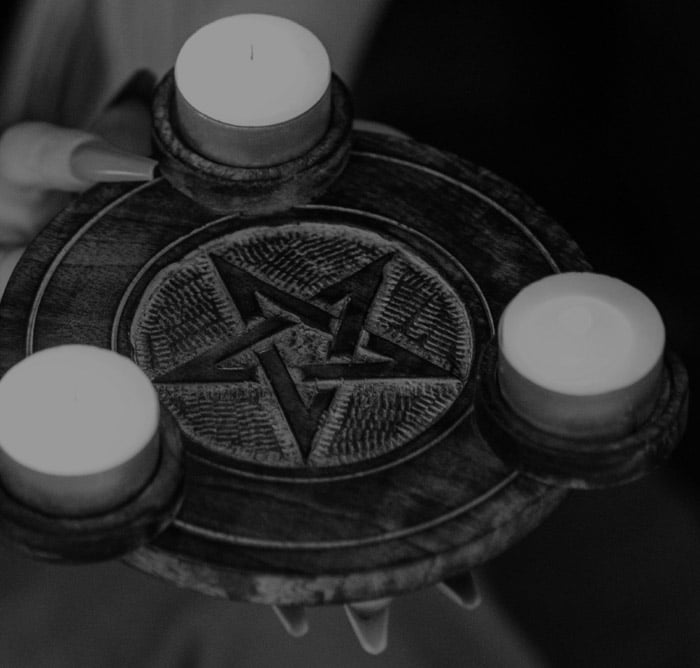 Introduction: Magick for the excessively-grounded?

In my experience, it’s not unusual for academic curiosity about the occult to develop significantly before will to really attempt. I’ve known many who were “interested” in “black magick” for many years before “actually trying” anything. And I also know many “just curious for now” -types who I foresee wanting to experiment eventually. What drives this sort of hesitation, though?

Undoubtedly, factors in temperament and upbringing play some role, here. Some people are naturally skeptical. Others have been taught skepticism by various disillusioning experiences. And then, there are also those who undecided re: whether they really want the occult to “work,” or not…

Additionally though, there is a particular combination of geekish-interest and reality-groundedness that I think dissuades people from actually trying magick. I mean, by this, the type who first gets into the occult via some manner of fantasy/horror/etc. fandom. Perhaps they are a role-play gamer, for example. Such individuals typically have solid self-awareness of the extent to which their hobbies entail immersion in “make-believe.” The occult attracts them, perhaps, as something similarly inspiring and fulfilling, and yet, more “real.” But how readily will they be able to distinguish an “actual” occult experience from an especially immersive LARP one? Doubt about this issue is then what restrains them.

Now, I was never much of a LARPer, so what I just described isn’t the exact problem I ever had. But in my youth, I had a related kind of self-doubt. Yes, this kind of doubt grants, I am “into” demons and “want it all to be real.” But if I do not normally experience supernatural things, why should I think that going into a dark room, and making certain gestures accompanied by certain words, will conjure them?

Obviously, I’ve since overcome this… 😈

Now, I certainly wouldn’t claim that what I propose below will fix the problem wholly and/or for everyone. But I do think it’s something that anyone who does struggle with suspending disbelief should seriously consider.

Let me suggest first, though, that behind this issue lies a further one, perhaps not sufficiently-acknowledged in magickal circles. And that issue is, not everyone attracted to magick is a natural at seeing spirits, perceiving things psychically, or etc. So many people do come into the scene with such channels open, however, that we kind of forget about those who don’t.

Guess what then happens when those who always had such channels open go to write books? They describe magick in a way that is all well-and-good for others as naturally-open as themselves. They do not necessarily, however, speak adequately to those not of said experience. I intend no harsh criticism of such authors, as inherently, one can only write from one’s own experience. It is, however, an issue that I intentionally set out to grapple with in my own writing. How, concretely, might one train those accustomed to keeping both feet solidly on the ground to suspend belief in the particular way that occult success requires? What has my own experience taught me in this regard?

And how might I use such experience to correct against the counterproductive elitism associated with the current Tenebrous Satanism is part of – i.e. to actually teach the capable, instead of squandering potential by lazily pouring out a bunch of esoteric gibberish and insisting that the “deserving” will figure it out somehow?

Several aspects of my praxis aim at addressing such issues. The one I will discuss in this entry, however, is the significance of ritual format.

How can ritual format help with suspension of disbelief?

My convictions about ritual are based upon my own experiences. Some individuals most assuredly will not share these experiences. Others, however, will. And insofar as I get the impression that said demographic may be underserved in a certain amount of current occult discourse, I see value in presenting my perspective.

Reflection and experience together convince me that many novice magicians struggle with both of the following challenges:

What I then propose, toward mitigating both of these at once, is that magicians i) formulate an all-purpose “standard” ritual opening, and ii) always stick to this format when performing any ritual, no matter what it is for.

I will explain each concept in more detail below.

How to make the opening “all-purpose”

So, how do you convince yourself that these particular words in this particular dark room make a difference that words spoken elsewhere are not expected to? By establishing through your words and actions that you have stepped out of your mundane everyday context. Nine Keys of Abyssal Darkness variously terms this as “establishing the extraordinary,” “raising the Temple,” “entering the naos state,” or simply “entering naos.”

(Note: “Naos” is a Greek word for the sanctum of a temple. It is among the wide variety of terms that Tenebrous Satanism appropriates from the Order of Nine Angles. Readers concerned about said connection should read this post’s reflections on the issue.)

My particular method of “establishing the extraordinary” has four general components:

Only the latter two of these are part of “the actual ritual,” but all are part of the experience. My own experience being, that because I was not someone who saw spirits, perceived energies and etc. at a young age, why would I anticipate casually having contact with such things, rather than having to take special steps in order to enter a state where such becomes possible? Vs. by doing these things, I signal, both via physical-aesthetic and psychological-emotional means, that something is different now. I am in the Temple; therefore, I can now do the extraordinary…

Now, this is where I anticipate two kinds of unimpressed reactions. One will be from the “traditional ceremonial magick” crowd. This reaction will be, “Othaos is saying nothing that hasn’t been obvious to every magician since forever. So why does she present this as some big revelation?” The other will be from the “chaos magick” crowd. That response will be, “why is Othaos saying magicians have to do all this old-timey fussy stuff? We get by just fine by not doing any of that!”

My answer: That type I described above, who harbors self-doubts re: distinguishing “real” magick and LARPing? They are, I propose, trapped where they are because of these two unhelpful discourses. Attempting traditional ceremonial magick leaves them second-guessing themselves re: do I really need to do all this, am I doing it right, etc. But what happens when they decide “chaos magick will be easier and more accessible?” They wind up dispensing with the very trappings that would have been most useful for helping to suspend their disbelief!

I mean no disrespect to chaos magick here. Its “we get by just fine by not doing any of that!” -type folks, though? Those are typically, in my estimation, the “channels already open” people I was talking about before. Yeah sure, you don’t need to “do all that stuff.” But may I suggest you could be overlooking how your experience may differ from the “less already-awakened-to-magick” person? My feeling is that such a person may be better served by the kind of compromise between traditional ceremonial and chaos magick that I practice than by an excessively free-form approach.  Or if nothing else, such individuals may benefit from “more Carroll and less Hine,” if I may be so bold as to suggest such… 😉

Using an all-purpose opening to establish the naos state attempts to address the suspension-of-disbelief problem. What consistency then attempts to address is the self-conscious-distraction problem. Master a single specific sequence, use it every single time, and how could you not become more confident?

Does it make for one more thing to remember, lengthening the ritual “needlessly”? Technically, yes. But consider the following specific issues I’d argue it helps with:

These are merely the top reasons that come to me re: why it is worthwhile to develop, memorize, and commit to using a standard ritual opening. Again, I’m not saying that magick won’t work without it, or that anyone who doesn’t use one is faking it. But for people who struggle both with suspension-of-disbelief and confidence, I strongly believe what I describe here is worth trying.

I mentioned elsewhere that a certain amount of contemporary left-hand-path ritual has never much spoken to me. A part of this I did not articulate in that entry is that often, such rites’ flow feels to me like “diving in too abruptly.” Meaning, essentially, I feel no assurance regarding the prospect of it working for me – unless I was to precede it with my own standard opening. The current entry thus provides a bit more context for that previous one.

What are your thoughts and experiences re: what makes for effective ritual magick? Or if ritual magick doesn’t work for you, what other techniques do you prefer? I’m especially interested in hearing from the latter case, being opposite my own experiences – always a good situation to learn more from! Wherever you’re coming from regarding magick, though, I’m interested to hear your constructive thoughts in the comments.